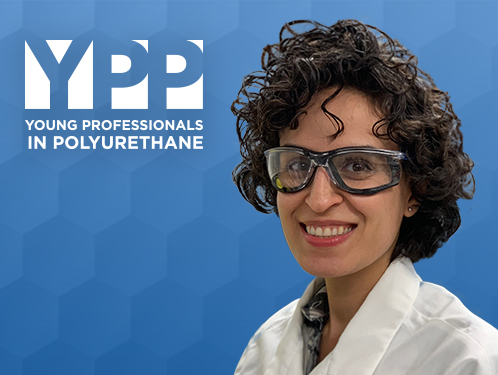 At 34 years-old, Rima Ghoreishi isn’t your typical chemist. For starters, she is younger than most of her colleagues and also happens to part of the growing number of women working in the field of polyurethane. Her education started in her home country of Iran, took her to Sweden and eventually landed her here in the United States, where she resides and works just outside of St. Louis. However, those are all facts you can glean from a glance at her resume. If you go deeper and learn about her life’s journey and about how her insatiable curiosity has been a consistent guiding force, serving her even from her earliest memories, you’ll know those things about her are also not typical and that her journey has been much more extraordinary.

Growing up in Iran, Rima Ghoreishi had an early experience with polyurethane foam on the floor of the factory that her father managed. Although she did not realize it at the time, that one encounter influenced and shaped her education and career aspirations for decades to come.

“I was 4 years old when my dad managed a factory that produced industrial refrigerators, ice-making machines and the like. When he took me there, I was fascinated by all I was seeing. But what genuinely struck me was a not-so-big piece of equipment, which would intermittently spit out a thick, off-yellow liquid into a transparent plastic bag. The liquid then grew bigger and bigger until it filled the bag. I asked the operator of the machine if I could touch the yellow stuff in the bag. Not waiting for an answer, I grabbed it. To my astonishment, the foam was neither squishy nor bouncy. It was solid as a brick. In that moment, I felt like I was being introduced to something precious. I later learned that bag contained a polyurethane foam.”

Later in school, Rima had passion and talent for mathematics and physics, but she credits a 10th grade teacher for igniting her love of chemistry by giving her a new understanding of the subject matter and how it relates to everyday life.

“In school, I despised chemistry. I felt like I had no talent for it. In 10th grade, I started to really understand chemistry in a different way thanks to my teacher, Ms. Eskandari. She gave me a fresh pair of eyes for examining chemistry, really showing how it touches our everyday lives in so many ways and how we are really dependent on it. Fostering that appreciation for it is really etched in my mind forever and influenced the decisions I made later in life to pursue this career path and become a chemist.”

Today, in her role as a formulating chemist, Rima works with a team of researchers and fellow scientists to produce innovative polyurethane foam chemical technologies. She describes working together as a team to overcome obstacles as the most rewarding part of the job.

“I like to call myself as a problem solver. In short, I try to formulate and improve flexible polyurethane foam systems. This includes mapping out experiments, making numerous bad foams until I make a good one and ultimately testing the foam’s physical and mechanical properties to ensure it is as beautiful inside as it is on the outside. This line of work is a long, winding road. You just have to take one step after the other and hope to get somewhere. You have to have faith in science to lead you and faith in your team to get you there.”

Many chemists are motivated by wanting to have their work make a positive impact on the world. Rima’s situation is no different. She takes great pride in striving to reduce waste by helping manufacturers do more with less.

“I am working with an efficient, more environmentally friendly blowing agent, a substance that is capable of producing a cellular structure via a foaming process. Think of the yellow liquid that I was talking about earlier. The blowing agent is what causes the liquid to expand into a foam. Seeing my work have a positive impact is infinitely rewarding, especially when the impact creates something that is more energy efficient. Polyurethane foams are a great example of that. By producing foams with low thermal conductivity, we have the potential to conserve the energy normally used to heat or cool a space.”

Rima recognizes that everyone has a different path when it comes to making career and lifestyle choices. She says taking your time and doing things that provide personal enrichment are the right course. “My junior year at college all my classmates knew what kind of jobs they wanted. At the time I was totally clueless. I am a little less lost now, but I still have no idea where this path will take me. I just know that I am confident it will help me grow intellectually and in a professional capacity. The end goal for me, I believe, is to constantly be gaining knowledge, passing that knowledge on to others and staying creative.”