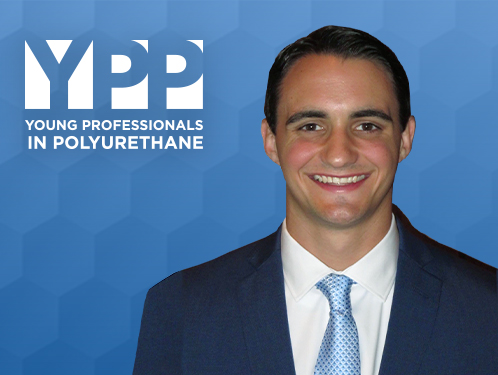 After graduating from the University of Texas with a chemical engineering degree, Austin Boudreaux hoped to put his newfound skills to work in the polyurethane industry. With a background in athletics and having played for various teams growing up, he was peripherally aware of polyurethane’s (PU) use in sporting goods and athletic wear.

“I was looking for ways to use to my degree,” Austin says. “I grew up playing sports and always thought it would be cool to work for an athletic wear company. In school, that turned my focus and attention to polymer science. Once there, I found an entire world of polyurethane applications and products that we use every day.”

For Austin, the choices were nearly overwhelming — finding endless fields of fascination in the polymer sciences.

“It was hard to choose a single discipline, but rigid foams used in industrial applications captured my attention,” he says. “It has such wide-scale use, and I felt like I could see a wider impact there in terms of my work.”

However, Austin says that he is not ruling out working in sportswear at some point in the future.

“Honestly, I see my career as a long arch,” he says. “I may make my way into sportswear at some point. To be honest, I’d like to build up an expertise in several fields and be a bit of a unicorn in the industry. That is the thing about polyurethane. What I learn in this role will have application in my next one.”

Today, the 25-year-old serves as Technical Service Representative for the Huntsman Corporation in the company’s Polyurethanes division. His day-to-day role involves adjusting rigid polyurethane foam formulations, leading technical discussions with customers to ensure their needs are being met and working on mid-scale processing and application development projects.

He often travels to a customer’s site, where he aids in the implementation of Huntsman’s products into the customer’s manufacturing process.

Regarding the best part of his job, he says, “The interaction with the customer and reward of problem solving is a very fulfilling process.”

Mentorship and Guidance for the Future

Even at the early stages of his career, Austin says the guidance and mentorship that he has received from those working at Huntsman has been invaluable to his on-the-job training, helping him excel in his role.

“Person-to-person mentorship is so important, but large-scale knowledge transfer is as well,” he says. “There is certainly an opportunity to create a trove of knowledge from each one of these industry leaders that includes information about their disciplines and its practical application.”

When it comes to attracting and recruiting young talent, Austin believes that polyurethane needs to have more household name recognition in order to entice young workers — such as himself — into joining the industry.

“If anything, the term polyurethane doesn’t resonate with the average person, and many people are unaware of the overwhelming presence of polyurethane technology in our modern world,” he says. “Polyurethane is a very versatile and malleable technology that is unrealized by most of those who are not associated with the industry. If that changes, we’ll see an increase in interest.”

Austin believes the polyurethane industry will help contribute to energy conservation, helping stave off the effects of climate change.

“Because I work with rigid foam for insulation, I believe that improved insulation for commercial and residential space will lower the energy requirements of buildings around the world,” he says. “The polyurethane industry services many other needs of our society; however, I think that the improvement in building insulation is the most relevant for helping reverse and reduce energy waste.”

A Future in Polyurethane

Over the course of the next several decades, Austin sees himself staying in the polyurethane industry. However, he says that he is uncertain of what niche he may work in or what form his work may take. He hopes to expand his knowledge base beyond rigid foam applications.

“There are so many different opportunities for polyurethane now and moving into the future, I think it will be even greater,” he says. “With so many disciplines, it is hard to pick a single one and say that, ‘yes, this will be my career path.’”

As the polyurethane industry seeks to recruit students at the college and high school, Austin’s advice to those looking to pursue a similar career path is to continue moving forward and that opportunity will come knocking.

“The application of polyurethane technology is versatile, but it also a bit of a niche product. You can pick up a specialty fairly quickly,” he says. “You can develop a sought-after skillset that allows you to work in many spaces and in many positions.”

Austin believes getting students to understand the impact polymer science has on daily life and the magnitude of career opportunity that exists within it will be central to helping the polyurethane industry attract and retain young talent.