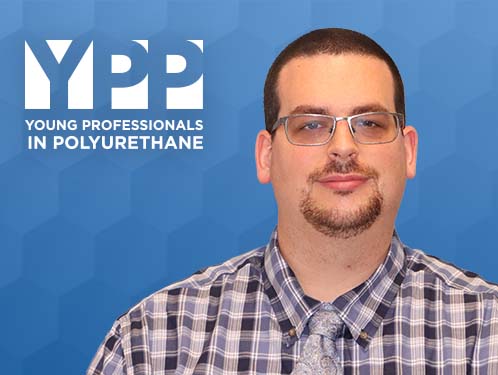 Like many young professionals working in polyurethane, Stephen Martin has a teacher to thank for instilling in him a life-long passion for chemistry.

“One of the most influential educators in my life was my high school chemistry teacher,” Stephen says. “She made learning chemistry fun and connected what we did in the classroom to the real world through demonstrations and lab experiments.”

Stephen says seeing the real-world application of chemistry early on in his education made him realize he could positively impact the world by choosing a career in chemistry.

Today, the 33-year-old works as a technical manager at BASF, where he uses polyurethane to improve the quality of controlled-release fertilizers.

When polyurethane is used in fertilizer, the nutrients can be released slowly, over time, rather than immediately dissolving when the fertilized crops are watered.

The most rewarding part of the job for Stephen is positively seeing his work impact the real world. For him, small breakthroughs in the lab can translate into big wins in tackling large-scale problems.

“There are so many instances in which polyurethane is helping to make the world a better place,” Stephen explains. “For example, the work I do in advancing fertilizer could help lead to improving crop yields, which then helps contribute to solving the problem of world hunger.”

The Origins of a Career

After obtaining a Bachelor of Science degree in chemistry at the University of Michigan, Stephen began his career in BASF’s Research and Development department.

“My first experience in the laboratory with polyurethanes was alongside colleagues researching polyurethane resins used for printing inks,” he says. “Polyurethane is often used in ink. It helps bind the ink to a dry surface and can help cut down on drying time.”

Having started as a research technician in 2011, his role and responsibilities have grown and evolved over the past decade as his expertise has expanded. Today, he serves as a technical specialist with BASF’s R&D team.

For students considering a career in polyurethane, Stephen emphasizes the importance of reaching out to industry professionals to better understand the wide array of career paths one can take in the field.

“There were so many things I didn’t know as a student that a conversation could have easily solved,” he says. “One small conversation can set you on the right path and save you from years of stumbling around in the dark.”

Taking the Next Steps

As he thinks about the next several years of his career, Stephen finds his feet firmly planted in the polyurethane industry, where he knows that he can continue making a positive impact through his work.

“My goal is to stay focused on the technical side of the work, where I can provide customer support and expand my knowledge and experience with polyurethanes,” he says. “I might eventually be willing to explore the business side of the industry, but I like what I’m doing.”