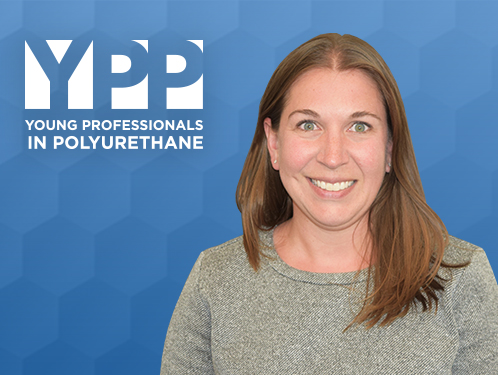 Growing up on her family’s farm in Auburn, Michigan, Staci Wegener spent the summers of her childhood tending fields of beans and sugar beets.

Her professional trajectory changed from farming to chemistry when in high school she landed her first job at a chemical company just down the road.

“I was responsible for putting labels on vials,” she recalls. “To this day, it still feels like it was the greatest job in the world. Air-conditioning all summer; no hard labor; it was just fantastic.”

Throughout her middle school and high school years, Staci excelled in math and science. As a student, she was accepted into a co-op program run by Dow — an opportunity rarely afforded to high schoolers.

“It functioned like an internship, where I received high school credit hours for going to work during the day,” Staci remembers. “It was the best of both worlds; I received credit hours, and I was getting paid.”

Staci later went on to a state college in Michigan called Saginaw Valley State University, where she pursued a degree in chemistry. Because she stayed close to home, she kept working in Dow’s co-op program, picking up between 20 to 30 hours per week during the school year.

It was during her later years as an undergraduate that she began thinking seriously about where her career path might lead. Staci says mentors were pivotal in fueling her career ambitions and that she leaned on their advice, deciding to go straight from undergrad to a PhD program at Northwestern University.

“Several of my mentors recognized that I was inquisitive about things and very much wanted to learn more about the world of chemistry,” she says. “I asked a lot of questions about why things are and how they worked. I think a lot of the people around me recognized that the pursuit of a PhD was the right fit for me.”

“I think people have misconceptions about a PhD program. It’s not like in undergrad where you take a bunch of classes,” she says. “Instead, it’s more like a bunch of research and problem-solving. Those things are interesting to me, but I understand they may not be for everyone.”

Finding Her Niche Through Rotations

After finishing her PhD, Staci eventually went to work at BASF as part of their Leadership Development Program. As part of a rotational program, every few months Staci joined a different department for a different assignment. In this way, she was able to explore various parts of BASF’s organization to see what fit. It was during one of her rounds that she landed in the polyurethanes systems business.

“In the rotational program, you don’t really know what you are going to do. It’s kind of an adventure,” Staci says. “I loved the polyurethane systems business, which provides tailor-made polyurethane products for businesses, and I haven’t left polyurethanes since. There’s just something really exciting about working on products that have practical, everyday application.”

A Future in Infrastructure

Staci says no two days for her are the same at BASF. As a segment manager, her job responsibilities include almost all aspects of managing the innovation pipeline – from running ideation and brainstorming exercises to overseeing the implementation of new product launches. Within the company’s polyurethane division, Staci’s department focuses on infrastructure.

“We hear in the news all the time about the state of our nation’s infrastructure,” she says. “From improving the roadways, we travel every day to securing pipelines that deliver the fuel we need; it’s really exciting to be working on something that is helping to improve the lives of everyone.”

Despite her position and knowledge, Staci says even when she started in the polyurethane division, the practical application of polyurethanes in daily life was lost on her.

“When I joined the polyurethanes business, I could recognize on a piece of paper what a polyurethane bond was,” she says, “but I had no idea how many everyday products contain polyurethane. People interact with it every day.”

Today, Staci is a strong advocate for better education about polyurethane and the availability of jobs it provides. She believes the industry, as a whole, needs to do a better job of connecting the dots for young students.

“I was doing a talk at a local college, and I filled a box with products that contain polyurethane and brought it in to share with the students,” Staci said. “During the presentation, people were excited. They saw the polyurethane is actually the foam in a cushion, or the midsole of an athletic shoe, and they were like, ‘oh, I get what this is and that it would be fun to work on.’”

“Curiosity is so important. Just because you don’t know about something, don’t just dismiss it. Don’t be afraid to take a chance,” she says. “I have interns, and I tell them that if you find yourself going down a career path, and you don’t like the way things are going, it’s never too late to make a change.”

Breaking into the Industry

Staci also advises her students to be bold and ask questions. She notes that the polyurethane industry is a small, tight-knit community that can feel intimidating — even now for her — but that industry professionals are always eager to share their knowledge.

“I still feel like a novice most days, but the people that I work with — a lot of the people at BASF — have spent their entire careers in polyurethane,” Staci says. “Everyone here is passionate about knowledge-transfer, passing on their knowledge to a new generation. They don’t want to see the work that they have done just fade away when they retire.”

A Focus on the Future of the Planet

Like other young chemists working in polyurethane, Staci is concerned about climate change and its lasting effects. She sees the polyurethane industry and the field of chemistry as being integral to finding solutions that will help reverse the damage done by climate change to the environment.

Today, her company is focusing on finding ways to close the loop on the circular economy — the idea of an economic system aimed at eliminating waste through the continual reuse of resources. Particularly BASF is looking to identify collection streams for materials like polyurethane that can be recaptured and reused.

“For this plan of sustainability to work, we have to get all the pieces of the value chain working together to close the loop,” she says. “You’re only as strong as your weakest link in any chain, so everyone has to work together to help solve these issues.”

Improving the Resilience of Our Infrastructure

Whether it is flooding in Venice, Italy, or wildfires brought on by drought in Australia or California, weather patterns and their resulting natural disasters are growing more extreme and chaotic. Staci’s work is helping cities and populations deal with the effects of climate change — an issue that is also of importance to her — by improving resilience in construction materials.

Materials used in the building of the world’s network of infrastructure need to be able to endure a broader range of conditions, including scorching heat, frigid temperatures, high winds and precipitation.

“As we design new structures or think about retrofitting existing ones, resilience in construction materials is becoming more important,” Staci says. “In many instances, polyurethane plays a vital role in giving the things we build greater thermal efficiency, improved structural integrity and durability.”

Curiosity as a Guiding Force

As she looks back on the progress of her career thus far, Staci says that her curiosity has been her primary driver, and she thinks it will continue to be the guiding force that pushes her research and work forward into the future.

“The thing about this industry is you get to pick your own path and follow it wherever it may take you,” she says. “There is just so much innovation happening at any one time. If you are curious about the world, you’ll find that curiosity leads you to some very interesting places and is infinitely rewarded.”

She notes that creativity and innovation are integral to her future at BASF and making products that help people every day.