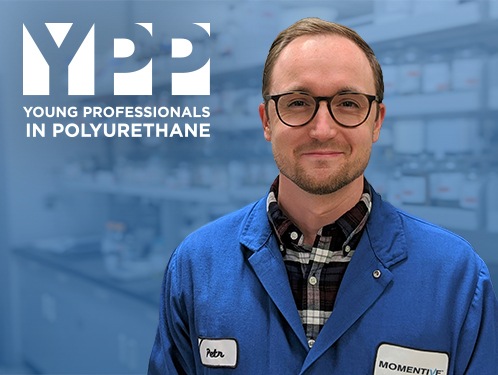 Petr Koutnik had a plan; he was going to spend his entire career in academia. When the young graduate student embarked upon his post-doctoral research, he intended to complete his studies, then look for a tenure track position at one of the many big-name chemistry departments at universities in the United States. Then, as plans do, his changed.

A Change in Career Path

As he progressed through graduate school and into his post-doctoral studies, Petr says he was “bitten by the gratification bug.”

He had an overwhelming urge to see the results of his hard work in the real world.

“In academia, you get to work on some cool stuff from a scientific standpoint,” he says. “But, at least in my role, I rarely got to see how the fruits of my labor were helping to improve people’s lives.”

A Future in Research & Development

Today, Petr is a research scientist at Momentive Performance Materials in Sistersville, W.Va., situated in the idyllic Mid-Ohio Valley. His department specializes in additives for molded polyurethane foams — those foams injected into a mold that then take on the shape of the mold as it expands. This kind of technology is often used in automotive manufacturing for parts such as car seats.

Working on projects and products both large and small, Petr says his biggest thrill is seeing his work make an immediate impact.

“It is exciting to see how newly designed materials perform,” he says. “Either as predicted, or the opposite, I love that the materials we work on here help people. We’re helping customers improve products and meet regulations to make things safer.”

By working together, he and his team are developing polyurethane additives that contribute fewer emissions while maintaining foam performance characteristics or, in many cases, improving them.

“Current trends indicate that the OEM requirements will become even more stringent in the near future,” Petr says, “and finding technical chemistry solutions to meet these stricter requirements requires us to come up with new ideas and deploy new chemistries. It is exciting to be a part of pushing the boundaries of what just a few short years ago we didn’t think was possible.”

The Role of a Research Scientist

In his day-to-day role, Petr spends much of his time designing new experiments, analyzing data and working in the lab. His role also includes troubleshooting to find technical solutions for clients.

In addition, writing is a big part of his job. Petr drafts reports, patent applications and invention disclosures. He is also a lecturer — preparing and delivering talks around the country.

Coming to the U.S.

As a young student, Petr left his home in the Czech Republic to come to the United States. At an early age, he knew that pursuing his dreams would require sacrifice.

“I never had any regrets over the career choices I made,” he says. “even though, in my particular case, it meant leaving everything I knew behind.”

Mentors to Guide Him

Upon arrival in the U.S., Petr enrolled at Bowling Green State University, where he studied supramolecular chemistry. Later, he became a postdoctoral research associate at North Carolina State University.

Through it all, Petr says that the guidance he received along the way from professors and colleagues already well-established in their respective roles was key to his success.

“I was lucky to be able to meet some of the best people in the field,” he says. “They were always happy to help. The role of mentors is crucial to one’s early career path and development.”

For those students considering a future working in polyurethane, Petr stresses the importance of having enthusiasm for your work and having patience with yourself as you grow as a chemist.

“I always try to be passionate about what I am doing, even if the experiments do not work out as I had planned. I try to enjoy everything,” he says.

In the coming years, Petr sees climate change as being the biggest challenge that the polyurethane industry as a whole will likely face.

“Implementing technologies that can transform atmospheric carbon dioxide into raw materials in a way that is economically feasible and environmentally responsible are needed,” he says. “There are many ways to approach and implement them, but the clock is ticking.”

Though he acknowledges the industry cannot tackle the problem on its own, he sees the role of chemistry as being central to helping solve climate change.

A Future in Polyurethane

Over the next several years, Petr is looking to grow more in his field and in his current position.

“We have a great global team,” he says, “and I enjoy collaborating and learning from them on a succession of very exciting and challenging projects.”

Petr still identifies as a relative newcomer to the polyurethane industry and says he is happy to have the opportunity to work alongside Momentive team members around the world.